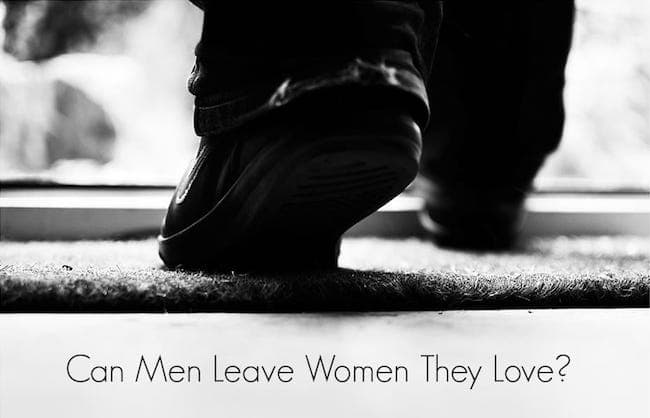 Recently, I was going through the newsletter archive of my friend Christian Carter, who as you know, is one of the leading experts in dating advice for women.

There was one particular issue in which the title literally jumped out at me.

A pretty bold announcement for an article.

As contradictory as this statement may seem, I know from personal experience that things like this do tend to happen.

I once left a woman I loved.

Why did I do it you ask?

I'll tell you in a minute, let's first go through Christian's five reasons why men leave women they actually love.

But before I do this, let me make something clear beforehand:

The reasons that will be stated in the following are NOT putting the women at fault for the men leaving.

It's almost never one person alone who's at fault, (there are exceptions).

As I've said many times over, a break-up is nobody's fault – it's just an occurrence of incompatibility.

Please keep that in mind while you continue to read.

Christian is referring to the old principle that we all seek pleasure and avoid pain. This is a basic human driving force behind everything we do.

He states that men tend to walk away if there is too much “pain” in the relationship, in forms of arguing and “freaking out” about things she doesn't like about him.

This has a huge impact on the decision whether he is willing to put more energy into the preservation of the relationship, or whether he moves on.

My take on this is that it's not necessarily an exclusive reason for men to break up. Nobody likes to be in a relationship where there's no healthy communication about problems and frictions.

It doesn't mean that you have to slug down everything you don't like about him or her, it just means that you have to develop the skill of communication in a healthy and productive way, (see reason #5).

Reason #2: Emotional Experience And The Future

Christian claims that a man draws conclusions from how a woman acts on the “little things” to what she would do when the sh** really hits the fan.

“…if a woman is consistently negative and emotional… and can't get herself together even when a man tries to explain things and comfort her… then a man isn't going to think that things could be any better for them in the future.”

This is a tough one, (sounds even a little sexist).

When I read this reason, everything in me screamed, “NO, this isn't true”. But on second thought, aren't we all doing this?

Aren't we – especially in the beginning of a relationship – constantly testing and predicting whether he or she is “future-proofed”?

And would we split up IF we came to the conclusion that he or she is NOT?

I leave that question in the room… you'll soon know why.

Ok, this is a big one. And a stereotype as well.

Do men leave women who they no longer find attractive even if they love them?

I'm going to phrase this blatantly: I think that only “bad men material” leave a woman whom he is no longer attracted to, given the relationship is promising and there are feelings involved, (i.e. it's not just a “physical” thing by mutual consent).

“Good men” will work out their own issues, (yes, losing attraction to his wife/girlfriend might be the man's own fault), they will take all measures necessary to re-kindle that spark of attraction.

But Christian rightly isn't exclusively talking about sexual attraction, he also says that:

“When a man doesn't FEEL that deep level of connection with a woman, at least every so often to remind him of why he's with her, then he'll forget why… and the relationship will become just a whole bunch of “work” to him.”

I think that this is a very solid point. The feeling of connection with your partner is of utmost importance and if you lose it, then you are in trouble.

Christian continues by claiming that the main mistake women make in this situation is to try to re-establish connection by “fixing things”, by talking about it or “working on the relationship”.

A man wants to DO things together to know his relationship is working, (not talk).

I couldn't agree more on this. This is one of the main differences between men and women when they try to fix a relationship.

My tip for you is to set “memory beacons” for your relationship by “experiencing” together. By experiences, I mean things you do together, challenges you master together, enjoyments you live through together.

All the things that really connect you.

Reason #4: The “Neediness” of Codependence

This is, of course, a classic which is applicable equally to women AND men, (in fact, this has a far more devastating effect to the relationship when men are behaving this way).

IF this relationship is everything to you – your life's purpose – and you have nothing else going on in your life, you are neglecting friends, your work, your hobbies, all the things that define who YOU are… then you will appear as needy, (or co-dependent).

And neediness in a relationship is one of the biggest turn-offs ever to men AND women.

The reason for all of these questions is that you lost yourself during the relationship.

“Often times a man will leave a woman because he sees that she depends too much on him and has lost her own sources of happiness”.

I have to admit that this one got me thinking.

Christian writes that despite the common misconception that people can't really change, men CAN change for a woman, but they have to do it out of self-interest.

A man needs his OWN reasons to change.

“It NEVER works, or lasts, if a man simply tries to change for a woman, or for the sake of the relationship.”

So according to Christian, a woman can take advantage of that fact by understanding HIS personal reasons for doing the work for a better relationship.

What most women are doing wrong is that they are trying to make the man understand how it affects HER, not HIM.

“People are motivated by the things THEY WANT, and not what others feel and want”.

Christian suggests that you work WITH your man, instead of against him.

He concludes by writing that one of the most important things is creating that emotional experience with a man. Because if a man is deeply committed to you and the relationship, every “issue” you might have are just bumps on the road… they cannot hurt you.

But if there is no commitment from his side, then every little problem is going to leave him “irritated, frustrated, and
have him wanting to blame you and withdraw”.

I told you at the beginning of this article that I once broke up with a woman I loved and said that I'd tell you my personal reasons for it.

The reason I broke up with her – and it was one of the hardest things I had to do, (despite my own break-up) – was because I saw absolutely no future for a life together… and I so dearly wanted a future.

Unfortunately, those incompatibilities were the ones that mattered.

So, Christian's reason #2 was definitely the reason I broke up with a woman whom I was deeply, emotionally involved with.

From my experience and knowledge I'd had until that moment, I just could not see a happy and fulfilled relationship future.

Ultimately, I am happy that I did it, because that made the way to meeting my wife, who I am still married to up until today.

If you want to learn more about why men fall out of love, I suggest reading this article:

5 Reasons Why People Fall Out Of Love