“You must learn from the mistakes of others. You can't possibly live long enough to make them all yourself.”
— Groucho Marx

When I had my very first serious breakup, I made all the mistakes you can possibly make, #3 (details below) being my preferable one.

And I continued to make them until that last life-changing breakup I had.

Had I known back then what I know today, my life would've taken a much different turn.

I would've been able to take control of my life much earlier.

And as a result, I would have been doing what I was destined to do and being with the people I really wanted to be with, instead of pleasing others and taking every partner who came along.

I’ve learned that knowing what you want and taking control is the key in life.

Nobody taught me that early on.

Now that I look back, I know what my worst mistakes were … and I also know that 95 percent of the people going through a breakup or divorce are making them as well.

Are you one of them?

How We Can Profit From Mistakes in Our Recovery

It is common knowledge that some mistakes are meant to be made: we learn and evolve by doing and correcting mistakes.

Mistakes let you know what doesn’t work and give you the opportunity to re-evaluate and take another approach.

Or they brutally show us their negative consequences so we avoid making them in the future (putting your hand on a hot stove, for example).

In breakup recovery, I consider breaking the No-Contact Rule one such path-correcting mistake.

This can help you realize how important the rule really is and help you stay on course further on.

But on the other hand, there are mistakes that you should avoid at all cost because they can not only delay your recovery but even prevent it completely from happening.

Here is a list of the five mistakes that I consider to be the worst and that you should NOT be making at all.

“Well, we all make mistakes, dear, so just put it behind you. We should regret our mistakes and learn from them, but never carry them forward into the future with us.”
― L.M. Montgomery

Mistake #1: Wanting them back

Admittedly, this is a forgivable one because it's part of a significant breakup stage you go through. But nonetheless, it's a mistake that will hold you back.

Your job now is to do the work: accept that the breakup happened and that reconciliation is not what’s in your best interest. By doing so, you can move on to the next healing stage.

Mistake #2: Trying to be friends

I've written about this extensively since 2007. The gist is that it's impossible to stay friends when one party is still emotionally involved.

Following the No-Contact Rule for 60 days is the only way to go here.

(MORE: Is being friends with an Ex possible? Listen to my father …)

I “cured” one breakup with the next relationship. Fighting fire with fire, right?

The thing is ― this never works.

Sooner or later, everything will catch up to you, and the pain will be a 100 times worse.

My final breakup was the culmination of all the breakups I made in my life that I didn’t have the courage to resolve. And that was the reason why it felt like an emotional nuclear blast.

Don’t let it come to that.

Mistake #4: Being stuck in the “acceptance stage” forever

I often get emails from people telling me that they can’t get over their Ex for many years (the longest period I’ve ever been told was 30 years).

People can get stuck in their recovery for an unusually long time, and they are unable to move on.

While they have accepted that the breakup happened, they never continue into the next phase, which is the “Letting Go” stage.

Why does that happen?

There are many reasons.

For one, we tend to over-idealize our Ex as the “ultimate perfect partner.”

'When you put your Ex on a pedestal, who could ever be a match?' Click to Tweet

We put them on a pedestal, and nobody else can be a match for that.

Also, we often start to identify with the pain in such a way that we start needing it … it becomes our identity.

And that is when things start to become dangerous.

Mistake #5: Not using this opportunity to shape your future love life

As I've so often preached, you must use this breakup as a catalyst to have better relationships in the future ― to find your perfect fit partner, as opposed to continuously running into the ones who are not good for you.

Because most of us experience just that: the same bad relationship over and over again in their life. 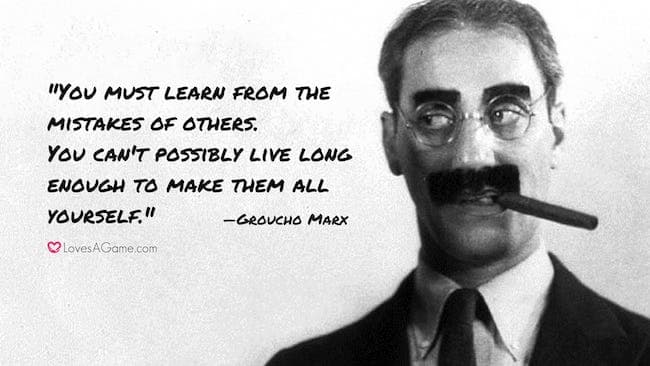 You must work through this breakup according to the phases you are in or else you've wasted this precious opportunity, and all you’ve accomplished is enduring the pain.

That’s not what your recovery is about.

Your recovery is about using this breakup or divorce as a catalyst for better and more fulfilled relationships in the future.

As I've said, I've made all the above mistakes so you don’t have to. And I would’ve continued making them forever if I hadn't run into my relative who showed me the way (you've all read my story).

So I urge you, learn from my mistakes, and don’t make them after your breakups.

Have you already made one or more of the above mistakes? If yes, feel free to share in the comment section below.

Your friend and coach,
Eddie Corbano