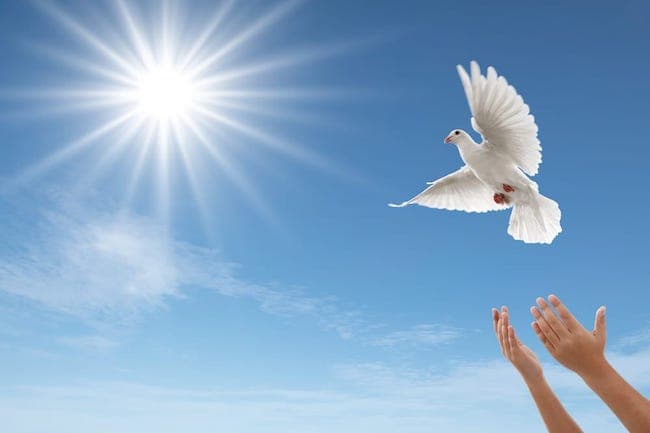 When we are no longer able to change a situation – we are challenged to change ourselves. – Viktor E. Frankl

Many years ago, I was on the road to meet a friend who lived in a town quite far away. This happened approximately a year and a half after my life-changing breakup.

I was OK back then. I was essentially over my Ex.

I had accepted the fact that it was over and I knew we wouldn't get back together again. I was already in another relationship, and yes she came to my mind now and then, but I was able to handle it.

Or so I thought.

What happened on that long lonesome trip threw me off my path so completely that I would never have believed it was possible.

But on the other hand, it was a blessing because it was the last step I had to take to get over her completely and finally let go of her.

It all started with a song.

Now I know what you think – not an “our song” kind of song. It was something completely different.

The radio played an unfamiliar song that touched me on such a deep level that I never thought was possible. The lyrics and the melody knocked me out completely.

This song brutally brought to my mind what I once had, and what I was missing so dearly for such a long time, even though I was already in another relationship.

It was there all the time, close to the surface, waiting to push through.

I pulled my car over and started to weep like a small child for over 30 minutes.

After I had composed myself again, I couldn't believe what had happened. Wasn't I over her? How come I lost it so easy?

While you move through all the phases of break-up recovery, with every step, you bring yourself closer to the ultimate goal or “the big indifference” as I call it.

“The big indifference” is something you need to say you are truly “over your Ex.”

Because one fact that remains, is that you're NOT over your Ex and you haven't let go until you can do this ONE thing:

Stand in front of them, talk to them and feel NOTHING.

Just a distant memory of a once held emotion. (I know that this seems impossible for you today, but ultimately this will happen).

But before you reach that goal, there is one big bump on the road – the one I was facing at that time, triggered by a simple love song.

What happened that day was that in spite of being over her, I just hadn't “let go of her” yet.

Where is the difference?

And after all that, I still broke down hearing a silly, cheesy song?

My problem was that in my head there was this mathematical equation I had set up so long ago. It was simple but effective and still held power over me.

A simple belief that was so powerful, that it made me break down after 1 1/2 years of breakup recovery.

It was there from the beginning without me even realizing it. Lurking, waiting to come out in the open.

Never underestimate the power of a single belief.

Now that I knew what went wrong, what held me back all this time, I could approach that problem directly.

I did that in two ways.

How To Finally Let Go Of Your Ex

I knew how powerful affirmations are. I used them heavily in the “Acceptance” phase, so I was confident that they would help me also with this problem.

Affirmations are the best way to change false beliefs, (break-up recovery essentially boils down to one thing – changing a set of dominant beliefs).

So I came up with this one:

“I let go of [Ex's Name] with love and clear myself of chains to the past to make way for new love to enter my life.”

Applied as usual: 3 times a day, 25 times in front of a mirror and one time in writing.

Let me tell you – it worked WONDERS.

After only 14 days, I felt a huge relief – as if a heavy weight I didn't even know existed – was being lifted from my shoulders.

The invisible blockade that was lingering in my newly formed relationship was removed so it started to thrive, and an overall well-being flooded my soul.

Not yet. One last thing to do.

Well, that turned out very unexpectedly.

Three weeks after that road-trip-incident, I received a strange letter. It was an invitation to a wedding.

My Ex was about to get married, and she invited ME to it.

I don't have to tell you how I felt at that moment. I mean, even after 1 1/2 years it still was a huge shock. I knew that she had a new boyfriend, but she was getting married?

As much as I was shocked about this, I knew that this was THE opportunity to test whether I had reached the “top” of my break-up recovery journey.

So I decided to go.

But I can tell you, to say I was anxious about it is an understatement. I was terrified. But I realized how important this could be for me.

The day of the wedding celebration approached and in my mind, I was there a thousand times already. I knew what I planned to do.

I would react as if nothing ever happened, putting on a big smile, but I still had that lingering fear of suffering a meltdown like what had occurred on that road.

Luckily it turned out differently.

Fast forward to the wedding celebration, entering the ballroom, seeing her for the first time after 12 months …

And I felt NOTHING.

She seemed to be more afraid of it than I was because she completely avoided eye-contact at all costs.

At that time, I was in great shape, in fact, the best shape of my life. I was confident, cocky, well dressed.

At first, I thought, “[her name] look what you are missing out on and look what a jerk you have standing next to you,” and I really smiled thinking this.

But then it shifted.

Suddenly I started to care less and less about what she was thinking of me. I was just in the now, enjoying the moment.

It was as if I suddenly got a good portion of power back that I was missing for so long. Slowly I started to feel free again.

So I went up to them, and everybody was staring at me wondering what I would do, (most of the guests knew my former relationship to the bride).

I stood in front of them in that super cool black suit I wore, and I heartily congratulated them both on their wedding.

I wished them all the best for their forthcoming life together and went back to my table. Full of confidence, pride, and power.

I never felt better in my life than I did that day.

I had people coming up to me congratulating me for what I did and for the way I did it.

It was a complete victory.

It was the day I finally let go of my Ex and started a new life.

How To Take The Last Step of Getting Over Your Ex

Now, I don't recommend doing what I did back then as a test whether you are over your Ex or not.

The implications could be disastrous.

At the beginning of your break-up recovery journey, it is advisable to decline invitations like the one I got respectfully.

Whether it's time or not to face your Ex solely depends on your progress in your recovery. Do it at the beginning, and you will crash and burn. Instead, do it when you:

and you will profit from it.

For me, it was 1 1/2 years after the break-up, which was actually rather late. It took me a while to figure out how you can speed up the recovery process substantially.

For me, it was exactly the right time for what I needed to do. If I hadn't, my recovery most certainly would have gone on much longer.

So what is letting go?

Letting go is a conscious process of discarding the belief that only your Ex holds the key to your happiness. Click to Tweet

It is the final step you need to take before you can say that you are over your Ex, and you are ready to start a new relationship.

But what if your Ex is not available for confrontation?

Then we must take hold of different measures.

There is a technique where you consciously expose yourself to your memories with your Ex in order to “desensitize”.

You do this for one hour by going through your pictures, videos, and stored memories.

The most important thing here is to dig deep really and to allow yourself to get into it completely.

Get emotional, cry if you have to. Continue despite the pain you feel, and do this until you feel numb.

It's basically the same as confronting your Ex, only “virtually.”

After you've done this you will feel exhausted and completely numb and indifferent.

Good. This means it worked.

But again, only do this if you fit the preconditions I've listed above! Otherwise, it will throw you miles back. Trust me.

If your break-up was longer than one year ago and you have gone through the main phases of break-up recovery – and you generally feel OK, but still feel there is something holding you back … then I recommend taking this “last step.”

I get many emails from readers asking the same thing. They cannot believe that after that much time, they still suffer:

I do wonder though, why after a full year, I'm still thinking about him as much as I do. I worry that I cannot move on fully.

The reason for this is, in most cases, an unrealistic over-idealization of the Ex.

Consciously letting go means saying goodbye to that limiting belief that only your Ex means happiness and no one else.

I did that back then and it almost instantly improved my life, my relationship, and my view of life.

I am sure you can too.