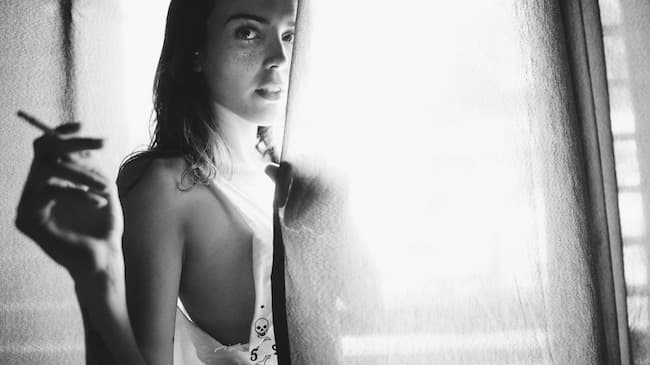 I am writing this article in spite of the possible danger of being penalized by other men for disclosing our weaknesses and leaving us – for lack of a better word – defenseless.

I can already hear the shouting, and see the torches lit in front of my house.

On the other hand, maybe they will celebrate because most men want to be seduced. They pray for it.

Dear Gals – you want to seduce a man, and you don't know how to?

Fear not. Help is on the way. I am writing this article only for you.

Exactly as in my article, how to approach a man, I thought about things I would fall for, (and have fallen for repeatedly).

But also, I asked my friend, Brigitte, (the man-eater), for her main techniques.

Either way, the principles are the same.

It really comes down to hitting that “hidden switch” that turns on the man.

Unfortunately, this particular switch is different for every man.

Sometimes it is not even related to physicalness.

It can be a word, an image in his head, an expectation. Other times, you can trigger it with a simple smile, a lascivious look, a seemingly coincidental touch.

It is your job to find and explore this “secret switch” for your man.

This article will help you to not only find this hidden turn-on but will also give you some ideas about how you can win the man you want.

My male readers will discover that several of these techniques can be used to seduce a woman as well. Surprise, surprise.

Maybe we're not that different after all.

Here are 10 tips on how to seduce a man, (use it cautiously, because with great power comes great responsibility and us men are sooo weak):

Believe me, the “where” is very crucial to your success.

Choosing a sports bar while the Superbowl is on may not be crowned with success.

A private dinner, with the appropriate romantic ambiance, on the other hand, will give you the best chances.

Choose places where you can minimize distractions, (and ideally competition). You must have his complete attention.

Besides, the proper surrounding can be very stimulative. Never underestimate the power of candlelight and accompanying soft music.

2. The Power Of Scent

The scent is one of the most powerful subconscious influences that affect our judgments.

In a survey, 89 % of the men revealed that scent can enhance the attractiveness of a woman.

55 % of those polled men went a little further and admitted that they would get amorous with a woman just because of her appealing scent.

Do you believe that?

You better! Everybody who has seen or read, Perfume: The Story of a Murderer, would know what I'm talking about.

Scent is one of the most powerful subconscious influences that affect our judgment about the other sex. The way you smell is a vital factor to your success in seduction.

You can compare it to pheromones in the animal world.

A woman can enhance her natural pheromones by using aromatherapy oils like sandalwood, rose, ylang-ylang, jasmine, and patchouli. They are known for their aphrodisiac properties.

Shakespeare wrote that Cleopatra received Marc Anthony on a ship with perfumed sails. The exotic scent made him fall in love with her immediately.

Even so much that he hopelessly gave his life for her.

Use a perfume that you like, but be careful not to overdo it.

Use it sparingly, and apply it to your body's so-called pulse points – wrists, behind your ears, in the bend of your elbow, behind your knees and on the inside of your ankles.

You can also try to spray the perfume in the air in front of you and walk into the mist.

Make your perfume a recognizable part of you. Make your scent imprinted in his mind.

3. Show A Little, But Hide A Little More

That is a turn-off for most men.

You need to find a compromise between showing and hiding your feminine qualities.

It's the right combination that makes the secret.

I like women who enhance certain body regions without actually showing anything.

Steer clear of the obvious. It is crucial that you actually feel sexy.

And don't forget some killer lingerie and sexy accessories like bracelets and necklaces.

Have the confidence of a supermodel.

Be a woman who knows what she wants, and how to get it.

Do you know how to do this?

But be aware – there is also a thin red line. If you overdo it, you will most likely look arrogant instead of confident.

You don't want that. Nobody likes arrogance.

You can start with renewing yourself.

Get a complete makeover – a new haircut, clothes, start losing weight. Never underestimate what a new haircut can do for you.

Also, watch your posture. Keep a straight spine with your shoulders back, exposing your chest.

Do everything that makes your confidence soar.

Men are very impressed by confidence.

Now it's time to spread a little hint to the man that he may actually have a chance with you.

Send him little signs of interest from time to time that will make him come forward:

Here again – do not overdo it!

Experienced men can read these signs, the inexperienced, well, even they will feel that something's going on.

6. The Magic of Anticipation

This is a variation of “playing hard to get,” which by the way is very doubtful to work. If overdone, it will harm you more than being of use.

Anticipation, excitement, and tension can be a huge turn-on for a man. Delay the gratification.

It must never seem to be easy for him.

Use the before mentioned signs of interest, then suddenly show disinterest, ignore him for two minutes. Then start again.

Two steps forward, one step back.

Start with almost accidental sidelong glances. You can follow up with a straight look.

Now, something starts that can simply be described as playful innocence, (someone once said to me that the French girls invented that).

The moment he looks back, you instantly lower your eyes and put on an embarrassed smile.

You can even emphasize it some moments later by looking again, this time longer, and then again lower your eyes.

This is flirting without talking, (we can learn a lot from the French when it comes to lovemaking).

When you reach for something, try to touch his hand accidentally.

Don't make it too obvious.

Also, touch him briefly during the conversation to make a point or when he just made an interesting remark about something.

The secret is being playful with casual touches now and then.

This creates tension as well as a physical connection. And more importantly, it subconsciously communicates that you’re not interested in “only being friends.”

Don’t underestimate the power of this.

Most women love to express themselves on the dance floor. Why not learn it and do it the right way?

There are courses on this, or just go to a club, watch and learn.

This is very powerful.

Now, there is a final ingredient to a successful seduction of a man.

He must not feel seduced.

He must think that he seduced you, not the other way around. Give him his victory, let him be the hero.

Men like that. It gives them a feeling of security.

Why not take advantage of that, if you get what you want!

Some other useful tips in short:

As we all know, Jason Biggs from American Pie was seduced the easy way, with not much effort, (who wonders?).

You are now ready to master – the art of seduction the sublime way, and getting any man you want.